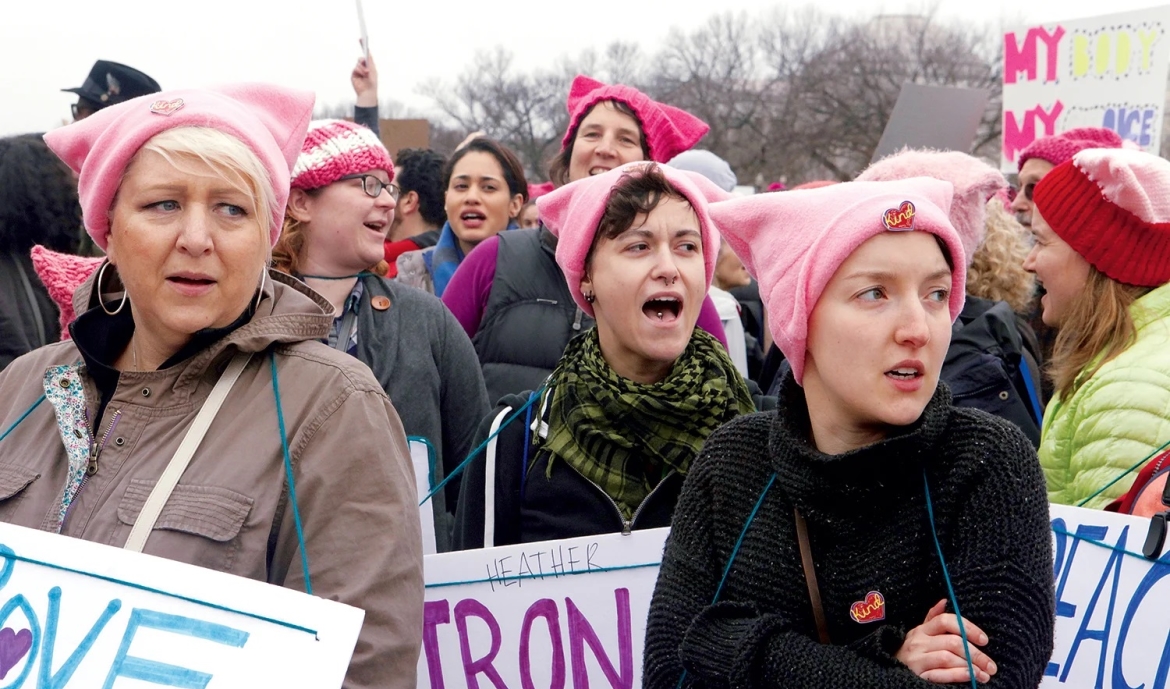 Once more unto the breach, dear friends.

I’ve written about women and their cultural/political ascendancy so much in recent years, especially the last three, that I worry about sounding like the proverbial broken record if I write any more. But it seems to me that as this idea is accepted more widely—including by commentators who see it as their own idea . . . 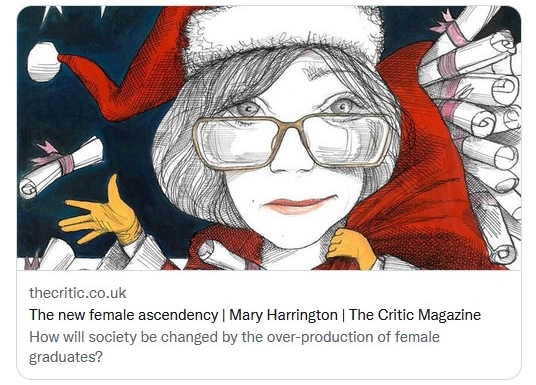 . . . there is a tendency to narrow the focus (e.g., “female graduates,” “HR ladies,” or “women explain wokeness”) so that the true extent of the West’s feminization is obscured.

Moreover, the case can be made that feminization is having not only an enormous but also a potentially fatal impact on Western civilization as we have known it. Thus, thumping the tub about this subject may be a good and necessary thing to do now.

To that end, I think at least several key points within this overall hypothesis bear repeating:

The big idea here is that women have been the principal drivers not only of the creeping wokeism post 2015 or so, and of the ongoing semi-spiritual movement known as the Great Awokening, but also of the general “leftward” (in fact, “feminine”) trends in Western culture and politics over the last six-plus decades. This is the period in which women moved en masse into, and achieved parity or dominance within, culturally and politically influential professions such as journalism, publishing, entertainment, law, academia, politics, even blogging.

It is not just from one or two of those professions but from all of them, and in every circumstance along the way (e.g., university life, engagement with social media, office politics, voting, protest marches), that women have been causing cultural and political change, effectively feminizing the West to a degree never seen before in any large civilization.

Activist women—mostly single, university-educated, and/or young—may be the “shock troops” of feminization, and the most dedicated and effective practitioners of wokeism and cancel culture. But women in general have been driving this social transformation.

Gender differences in attitudes and behaviors were presumably shaped—at a biological level with changes that cannot easily be undone—by men’s and women’s distinct roles during the long period of hominid evolution, roles that for women centered on maternity. Women even now in modern times appear to be markedly more emotionally sensitive than men on average, quicker to form social networks, less interested in abstract and inanimate things, less interested in systems, more personal (including ad hominem) in their thinking, and more fearful—not just of ideas and people they dislike but also of toxins and other putative environmental threats. All these differences have had cultural and policy consequences as women’s power has increased in societies designed and traditionally run by men. One could say that women effectively have been using their new cultural and political power to renovate and redecorate their civilization according to their distinctive tastes. As Virginia Woolf put it in her 1938 essay, “Three Guineas”:

Let us never cease from thinking—what is this “civilization” in which we find ourselves?

Cultural and political changes that have plausibly been driven by the ascendancy of women in Western societies are not limited to the extreme changes associated with “wokeism.” They include also relatively mild and gradual, long-term trends: 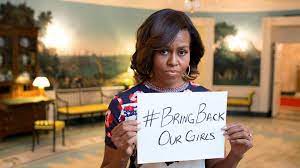 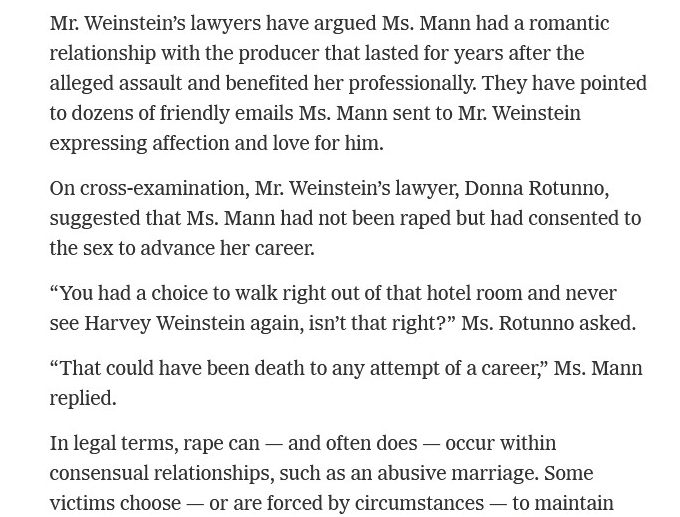 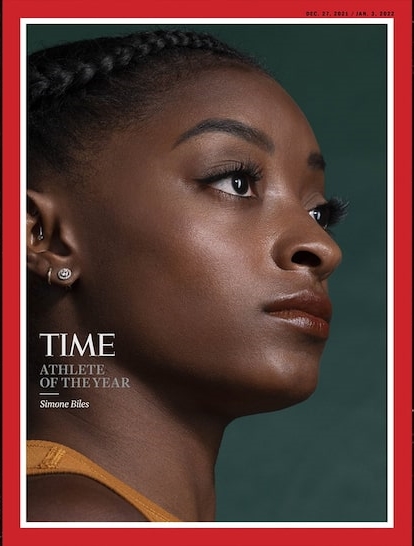 Cultural/political feminization, far from being “progress,” is probably destroying Western liberalism—the liberalism that emancipated women in the first place

Yes, men on average have their own ways of thinking and acting—their own stubborn, long-evolved biases. And yes, the traditional male mindset is not necessarily optimized for running human societies in the 21st century. But there is an obvious reason why the male mindset, compared to the female mindset, is probably better adapted for managing culture and politics: Men have been managing culture and politics, and getting punished in the harshest ways for failure, for hundreds of millennia. Women, by contrast, have been working on a large scale in public life for not even two generations—and still seem inclined to blame men when things go wrong.

On the flip side of that argument is another obvious point: Women’s mindset is not simply unadapted or insufficiently adapted by evolution for managing public affairs; it is adapted specifically for other tasks, mainly domestic tasks revolving around the bearing and raising of children. In other words, women’s higher emotional sensitivity (compassion, guilt, fear, anxiety/turmoil); their relative indifference to machines and systems and cold, abstract thought; their stronger fear of toxins; their greater tendency to think un-independently and transmit social contagions, etc. are in a fundamental sense out of place in the culture- and policy-making spheres.

I’m not suggesting that women’s traits are totally separate from men’s in this regard—for virtually any trait there would be two highly overlapping distributions, so that there would be lots and lots of women further towards the “male” end of the distribution compared to the average male.

But there clearly are differences between the means of those distributions, between the average male and the average female in other words; and the central idea here is that those differences, on a population level, are not only meaningful but potentially cataclysmic in their civilizational impact.

That impact is evident not only in the broad cultural and policy shifts since the early 1960s—the “pink shift” as I have called it—but in the more recent and extreme policy changes in places where cultural and political feminization is most advanced: “defund the police,” “let violent criminals out on bail,” “open the borders / diversity is our strength,” “let homeless people camp and crap wherever they like,” “give addicts needles,” “math is racist,” “logic is sexist,” etc. Not all of these policies are wildly popular, and obviously specific groups of hardcore activists are to blame for some of them, but I don’t see how these changes, collectively, could have taken root to the extent they have except against a heavily feminized cultural background—they are essentially ad absurdum expressions of the feminine mindset applied to policy.

I don’t think that every manifestation of feminization will be harmful in the long run. But some will. The move away from free speech towards speech- and thought-policing seems pretty ominous. Even worse, I suspect, is the encouragement of mass non-Western immigration to Western countries. One does not have to “hate” non-Western immigrants to understand that they and the culture they bring with them are . . . non-Western . . . so that the more there are of them, the less Western their host countries become. The women who encourage mass non-Western immigration seem surprisingly indifferent to the fact that non-Western cultures generally are less liberal, and a lot less friendly to the idea of female power, compared to Western cultures even from a few decades ago.

Can liberal Western societies nevertheless avert their impending self-destruction, by—among other measures—reining in cultural/political feminization? We’ll soon see, but I doubt it. I think it could help some to talk more about this cultural feminization hypothesis—“cult-fem theory”—at least as a way of dispelling the holy aura of “progress” that feminization-related social changes have acquired. But could one attack cultural feminization more directly and conclusively? Could one expel women, or even just the “bad apples,” or even persuade them to think and act differently, in all significant Western institutions—legislatures, government offices, universities, corporations, media organizations, philanthropies—where they are now embedded and substantially run things? I don’t see how. I don’t think liberal Western societies have any strong defense against this threat, other than by reverting to overt illiberalism.