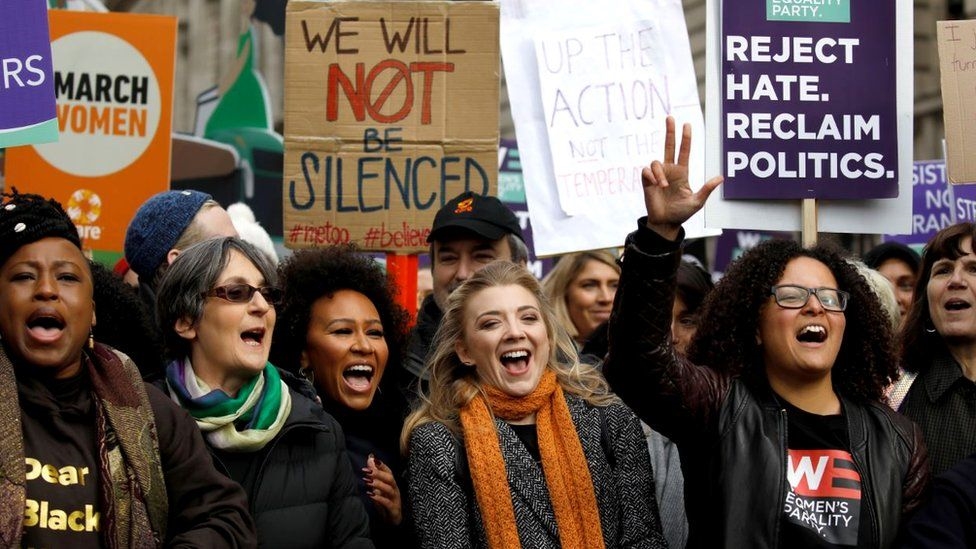 The idea that women, on average compared to men, think differently, behave differently, and vote differently, is not a new one. What I think has some originality, though—certainly it seems to have been too hot, as recently as a few months ago, for any MSM or MSM-adjacent editor to handle—is the idea that women, especially by entering culturally influential professions en masse since the 1960s, have transformed Western societies: pulling them leftward and introducing political correctness, etc., but more precisely feminizing them, with arguably dire implications for Western civilization.

In case it’s useful to others writing in this area (and because like most creative people I crave credit), I’ve listed some of my relevant works in this area—and all the ones I’m now aware of from other writers.

An old blog post, and my first and probably briefest expression of the cultural feminization hypothesis. Inspired by something controversial Jeremy Clarkson said, and also by the Larry Summers controversy which I would later write about in more detail.

Also an old blog post but a much longer, more discursive account of the hypothesis. Most of the pieces I’ve written since then have been, for the most part, compressed versions of the ideas expressed here.

I got this published on Roosh V’s Return of Kings website (under a pseudonym I no longer use).

Essay on a new website, not using my real name—a relatively brief version of the cult-fem theory, with a bit at the end about testosterone levels and fertility that is probably somewhat relevant, though not really central to the theory. I started the website and placed the essay on it because I had offered a version of the piece to two or three conservative webzines, with no luck.

(Tyler Cowen linked to this essay in his Marginal Revolution blog two and a half years later, prompting a flood of readers.) 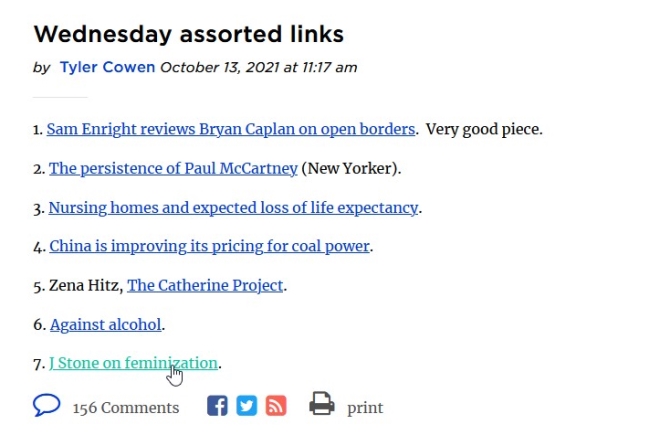 A fuller account of the 2005 Larry Summers “intrinsic aptitude” controversy/hysteria, with some cult-fem theory. If you read just one of my essays, make it this one. A favorable reference to this in a tweet from @toad_spotted, some weeks after it was posted, induced many thousands of people to read it—and the “Great Feminization” piece—and encouraged me to keep writing.

Some cult-fem theory here, touching on women’s greater ability to form networks/coalitions, especially to cancel (or prosecute) men. Mainly, though, this was an examination of #MeToo-type cases against the historical background of hysterias including medieval/early-modern convent hysterias, Salem, modern recovered-memory case epidemics, etc.

Short piece summarizing the theory—thanks again to James Poulos & Co. for publishing it.

More on the apparently superior female ability to form networks and transmit social contagions, as a general source of political/social instability. “The Great Awokening’s transformation of big institutions reflects not only the general fear of personal cancellation within these institutions but also the ‘critical mass’ of susceptible women who work in them.”

My initial online searches using keywords like “feminization” were curiously uninformative (a lot of stuff on trans medical issues), but after Tyler Cowen linked to my “Great Feminization” essay two months ago, I started digging again. I’m sure this is still a very incomplete list.

Note that Cowen himself has written about feminization in occasional columns and blog posts, going back at least a few years.

The authors “envision the emergence of a new `feminized’ America, a society made more human, less destructive, and more compassionate by women’s nurturing and integrative influences in all walks of life.”

1987    “The Feminization of the American Left” (James Neuchterlein, Commentary)

Contrasts modern leftism with the more masculine leftism of yore. “Feminization, as understood here, suggests the establishment of traditionally feminine virtues (those normally associated with the private realm) as norms of behavior for public life. It indicates an ethic of noncoercion, a preference for emotion over rational analysis and for noncompetitive modes of social interaction, a focus on being rather than doing and on interpersonal relations as the primary preoccupation of the good life.”

Though never really in a systematic way, as far as I know, Paglia has frequently made references to issues that relate to cultural feminization. For example, in a short essay on #MeToo in 2018: “The big question is whether the present wave of revelations, often consisting of unsubstantiated allegations from decades ago, will aid women’s ambitions in the long run or whether it is already creating further problems by reviving ancient stereotypes of women as hysterical, volatile and vindictive.”

Not as relevant as its title suggests. Douglas argues that in the late 19th century American literature became “feminized” with “books that idealized the very qualities that kept [women] powerless: timidity, piety, and a disdain for competition.”

“Think of values like nurturing and caring, emotion and sentimentality, connection and community, passivity and submission, vanity and appearance, cooperation and equality, openness and access, manipulation and influence. These are the values on the ascendancy in our public and private lives.” Robinson covers the ground pretty well, and projects the same sense of awe that I had when I started to perceive the significance of this unprecedented cultural development. (Her piece may have been buried in the search rankings until Cowen linked to it a few months ago. Also, the 2006 date attached to the article may have been the date of uploading to the web, not the original magazine publication date.)

2009 “The Education of a Libertarian” (Peter Thiel, CATO Unbound)

Within this essay by the then-not-so-well-known tech billionaire and libertarian evangelist is a recognition of at least one aspect of cultural/political feminization: “. . . I no longer believe that freedom and democracy are compatible,” Thiel wrote. “The 1920s were the last decade in American history during which one could be genuinely optimistic about politics. Since 1920, the vast increase in welfare beneficiaries and the extension of the franchise to women—two constituencies that are notoriously tough for libertarians—have rendered the notion of “capitalist democracy” into an oxymoron.”